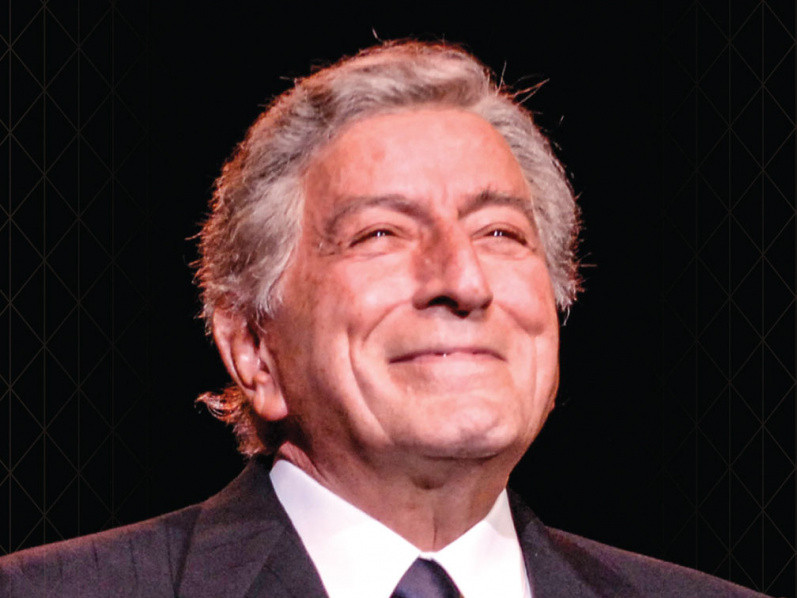 Tony Bennett’s life and philosophy is the embodiment of the Great American Story. Having celebrated his 93th birthday on August 3rd 2019, his career as the pre-eminent singer of the 20th and 21st centuries is unprecedented. He continues to be embraced and loved by audiences of all generations.

With millions of records sold world-wide and platinum and gold albums to his credit, Bennett has received nineteen Grammy Awards—including a 1995 Grammy for Record of the Year for his MTV Unplugged CD which introduced this American master to a whole new generation—and the Grammy Lifetime Award. His initial successes came via a string of Columbia singles in the early 1950s, including such chart-toppers as “Because of You,” “Rags to Riches,” and a remake of Hank Williams’ “Cold, Cold Heart.” He had 24 songs in the Top 40, including “I Wanna Be Around,” “The Good Life,” “Who Can I Turn To (When Nobody Needs Me),” and his signature song, “I Left My Heart In San Francisco,” which garnered him two Grammy Awards.

Tony Bennett is one of a handful of artists to have new albums charting in the ’50s, ’60s, ’70s, ’80s, ’90s, and now in the first two decades of the 21st century. He has introduced a multitude of songs into the Great American Songbook that have since become standards for pop music. He has toured the world to sold-out audiences with rave reviews whenever he performs. Bennett re-signed with Columbia Records in 1986 and released the critically acclaimed The Art of Excellence. Since his 1991 show-stopping performance at the Grammy Awards of “When Do The Bells Ring For Me," from his Astoria album, he has received a string of Grammy Awards for releases including Stepping Out, Perfectly Frank, and MTV Unplugged.

In the new millennium, Bennett’s artistry and popularity was higher than ever. In 2006, the year of his 80th birthday, his Duets: An American Classic was released. The album—which included performances with Paul McCartney, Elton John, Barbra Streisand, Bono, and others—won three Grammy Awards and went on to be one of the best-selling CDs of the year and Tony’s career. Bennett’s first Duets album also inspired the Rob Marshall-directed television special Tony Bennett: An American Classic, which won seven Emmys making it the most honored program at the 2007 Emmy Awards. In celebration of his 85th birthday in 2011 the release of Bennett’s highly anticipated, Duets II, featured Tony performing with a new roster of celebrated artists including, the late Amy Winehouse (her last recording was their duet of “Body and Soul”), Michael Bublé, Aretha Franklin, Josh Groban, Lady Gaga, John Mayer, and many others. Duets II debuted at #1 on the Billboard Album charts, making Tony the only artist at the age of 85 to achieve this in the history of recorded music. Bennett won two Grammys for Duets II in the 2012 Grammy ceremony and that year marked the 50th Anniversary of the recording and release of his signature song, “I Left My Heart in San Francisco.” A documentary entitled, The Zen of Bennett, which was created and conceived by Danny Bennett, Tony’s son and manager, was premiered at the Tribeca Film Festival 2012. At the end of 2012, Bennett also authored his fourth book, the New York Times bestseller, Life is a Gift, which highlights his personal philosophies learned throughout his life and career. Tony’s collaborative jazz album with Lady Gaga, released in 2014, Tony Bennett & Lady Gaga: Cheek To Cheek, debuted at #1 on the Billboard Top 200 album charts, making Bennett, at the age of 88, the oldest artist to have a #1 album—breaking his own previously established historical record. “Cheek To Cheek” won a Grammy in the Best Traditional Pop Vocal category. Bennett’s 2015 release, The Silver Lining: The Songs of Jerome Kern won a Grammy for Best Traditional Pop Vocal album.