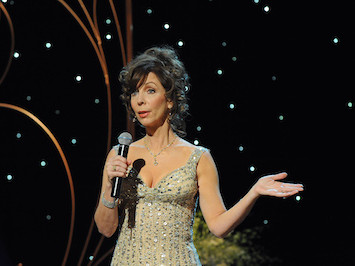 A house-filling favorite in Las Vegas since she opened as one of the hottest tickets in town in June 2000, Rudner is known for her epigrammatic one-liners. Over the course of a fourteen year run and 2,000 plus shows, she has sold one and a half million tickets and become the longest-running solo comedy show in the history of Las Vegas. She has been named Las Vegas’s “Comedian Of The Year” nine years in a row and in 2006 received The Nevada Ballet’s “Woman Of The Year” Award.

Rita Rudner has written five books; her bestselling non-fiction titles, Naked Beneath My Clothes Rita Rudner’s Guide to Men and I Still Have It…I Just Can’t Remember Where I Put It, plus the novels Tickled Pink and Turning the Tables.

Rita Rudner lives in Las Vegas and Monarch Beach, California, with her husband and daughter, Molly.