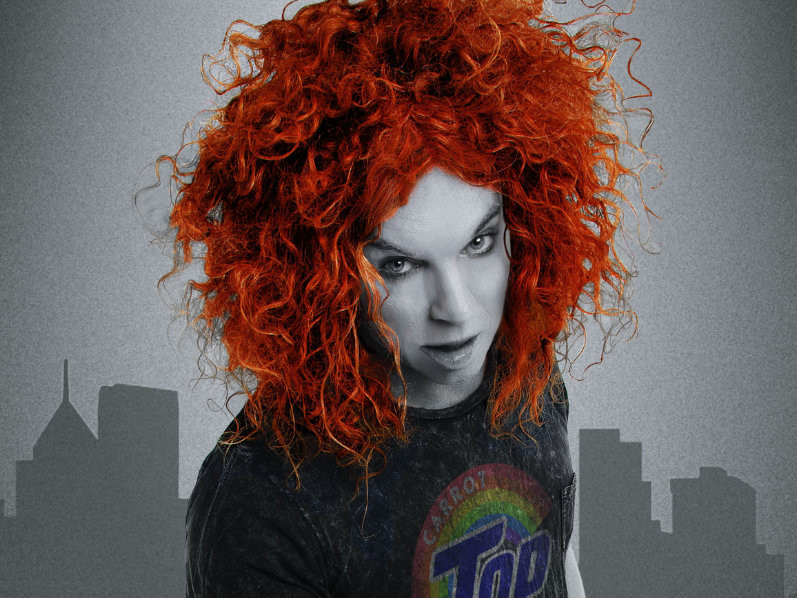 Scott “Carrot Top” Thompson has been making audiences around the world laugh for more than three decades. Since his debut on “Star Search”, Carrot Top has soared to success and become one of the most recognizable entertainers in the world. Since 2005, fans have flocked to his Las Vegas headlining residency at Luxor Hotel and Casino to catch comedy’s King of Props induce sidesplitting laughter with his current take on pop culture, music, and headlines of the day in a continually evolving show.

The trademark red locks and the undeniably inventive use of props have vaulted Carrot Top to the level that most comedians can only hope to reach “Nobody can steal my act,” said Carrot Top, who constantly channels his creative genius to invent new props. With a dozen trunks filled with approximately 200 props on stage each night, audience members can count on not seeing the same show twice. “I love creating props that are relevant to whatever’s current – from a news headline to a song I heard on the radio.”
Carrot Top got his start as a student at Florida Atlantic University in Boca Raton, Florida during his freshman year, when he went to a club and saw live standup comedy for the first time. A few months later, his roommate convinced him to sign up at an open mic night and after a handful of nerve-wracking first performances, he had caught the comedy bug.

After building a following on the comedy circuit that made people laugh nearly every weekend, his first television appearance was on “Comic Strip Live” in 1991. Things changed for Carrot Top forever in 1992 with his first appearance on “The Tonight Show.” That appearance exposed his unique brand of comedy to every home in America. After an impressive 31 appearances, Carrot Top had the distinct honor of appearing on the very last episode of “The Tonight Show with Jay Leno.” Carrot Top’s other credits include hundreds of television programs including “Live with Regis and Kelly,” “Politically Incorrect with Bill Maher,” “The Late, Late Show with Craig Ferguson,” “Late Night With Conan O’Brien,” “CSI: Crime Scene Investigation,” “Gene Simmons’ Family Jewels,” “Chelsea Lately,” “Last Comic Standing,” “Criss Angel - Mindfreak,” “Tom Green Live,” “The Neighbors,” “The Jim Gaffigan Show,” “Tosh.O,” “Glee,” “Family Guy,” “The Ellen DeGeneres Show,” Oprah Winfrey Network’s “Where Are They Now?,” ESPN commercials, and as spokesman for 1-800-CALL-ATT. Carrot Top also starred in his own movies “Chairman of the Board” and “Dennis the Menace Strikes Again.”

Most recently, he appeared in “Sharknado: The 4th Awakens,” “The Hangover,” and the Trailer Park Boys’ film “Swearnet: The Movie.”

Carrot Top’s shows are a spectacle worthy of most arena rock bands and features lights, music, fog machines, and streamer cannons – all in addition to his trunks full of props.
“When I started touring at the beginning of my career, I had two trunks and a strobe light,” said Carrot Top. “Things got pretty crazy pretty fast and before I knew it, I had a team touring the country in an 18-wheeler with 35 trunks full of props.”