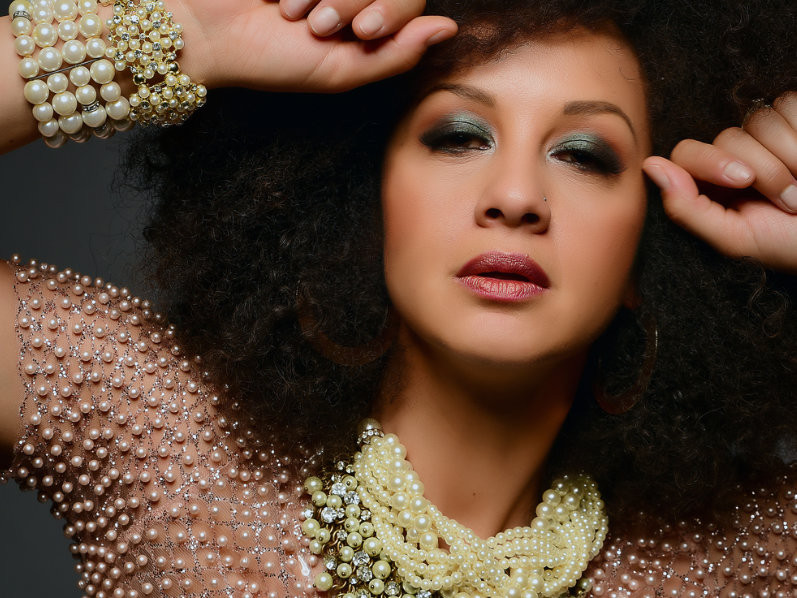 Rebecca is an accomplished singer/songwriter, and has been singing as long as she can remember. Growing up in a musical home, she had been exposed at a young age to a broad range of artists, genres and styles from her mother, who is also a vocalist. With such influences, it seems a natural progression that Rebecca has followed in her footsteps.

Rebecca Jade has performed with some of the most sought-after musicians all over the world and her versatility has allowed her many unique opportunities to perform: Rebecca has toured with the Queen of percussion, Sheila E. since 2017 and appeared in the Emmy-nominated show, “Let’s Go Crazy: The GRAMMY Salute to Prince” that aired on CBS in April 2020; She also sang background vocals for Sir Elton John at the 2020 Academy Awards; Rebecca has appeared as a repeat guest artist on the Dave Koz Cruises since 2016 and made her debut as a guest artist on the Dave Koz 2021 Christmas tour; Rebecca opened for Will Downing and Boney James at a sold-out Valentine’s Day concert in Long Beach, as well as opened for Jeffrey Osborne for the Thornton Winery Summer Concert series, both in 2019; Rebecca has done multiple concerts at Spaghettini in Seal Beach and was the singer in the Houseband at Anthology in San Diego for 5 1⁄2 years; She was selected as the official singer of the San Diego Gulls NHL hockey team’s anthem during their 2015 and 2016 hockey seasons.

As an Artist, Rebecca Jade earned two San Diego Music Awards in 2022 for “Best Music Video” & “Best R&B/Funk/Soul Song, "Song of the Year" for 2021, & “Artist of the Year” for 2020, and is currently working on her next record, A Shade of Jade, which is set for release July of this year. Rebecca has opened for Grammy-nominated artist, Musiq Soulchild on two separate occasions. Rebecca is also a jazz vocalist and released an album of Cole Porter classics titled, Planet Cole Porter, with arranger/producer/jazz guitar virtuoso Peter Sprague, which earned them a 2018 SDMA for “Best Jazz Album”. She is the front-woman for the soul/funk band, Rebecca Jade & the Cold Fact, and they collectively earned SDMAs in 2014, 2015 and 2017, and a “Best of San Diego” Award in 2016. The band had the opportunity to open for and Rebecca to sing with El Debarge. Rebecca Jade & the Cold Fact released two full-length albums, one self-titled and the 2nd one
called, Running Out of Time. Prior to the Cold Fact, Rebecca released her debut album collaboration in 2011 titled, The Jade Element.

Rebecca has over 30 years of recording studio experience. She has sung background vocals, demos and jingles on many different projects, including projects with Kiko Cibrián (Luis Miguel) and Kevin Flournoy (Chaka Khan), and has been featured in a variety of notable works, including being featured on two songs on DW3’s recent self-titled album that went #1 on the UK Soul Charts in 2020, and singing backing vocals on Aubrey Logan’s 2nd full-length album, Where the Sunshine is Expensive, which went #1 on the Billboard charts in 2019.

Rebecca is an actor, having done a variety of work for companies, such as SDG&E, Pechanga Casino, Qualcomm and UCSD, and featured as a singer in the film, “5 Hour Friends” (starring Tom Sizemore). She is also a pin-up model for vintage-inspired clothing.
Rebecca graduated from UC Berkeley on a full basketball scholarship with a degree in Theatre & Performance Studies, and has earned her MBA in Marketing from the University of Phoenix. She has also advanced her musical education by studying Jazz Theory and Classical Voice at Grossmont College. Rebecca is an avid motorcycle rider, has an affinity for classic cars, and loves the Arts community as a whole. She still plays basketball recreationally.