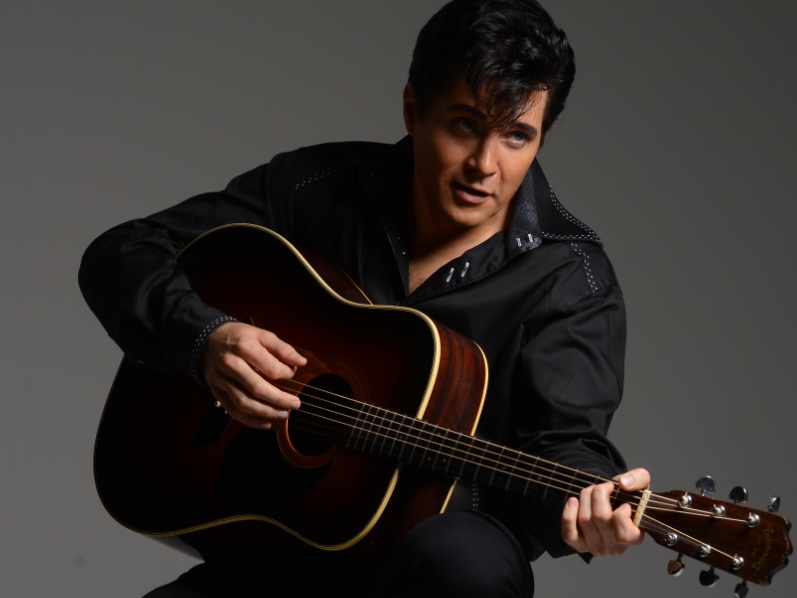 A Tribute to the King

Travis LeDoyt is known as “the world’s best” at portraying young Elvis Presley in his prime in the 50s and 60s.  His uncanny resemblance to the “King of Rock and Roll” has audiences gasping when he takes the stage.  Once he begins to sing and dance, fans are truly captivated by the authenticity of LeDoyt’s performance, even garnering high praise from those who knew Elvis personally.  Sold out shows and repeat engagements around the world further attest to LeDoyt’s impeccable ability to capture the very essence of “The King” and leave fans waiting more.

LeDoyt, who grew up in Greenfield, Massachusetts, was known as the “class clown” throughout school.  Everyone expected him to do something that would put him in the public eye, but no one, including Travis expected it to be as a singer, let alone a tribute to Elvis Presley.

It all started with a dare to compete in a high school talent show, combined with Travis’s discovery of a video of Elvis performing in the 50s.  He was intrigued with the look, moves and voice of the King. Travis soon found himself mimicking Presley in the mirror at home.  It was also amazing that when he combed his hair back he looked like Presley.  He decided he would try to bring Elvis to life at the talent show and it was such a hit that he immediately began getting offers to perform.   Since that time he has performed around the world in some of the most prestigious venues and in front of thousands upon thousands of fans.

Travis is currently touring with a three-piece band based in Nashville, performing songs from 1954 to 1970.  He also does a Gospel show and a Christmas show that feature fan-favorite songs.  The audience is taken back to a time when things were better and exposes the music to younger generations who never witnessed the excitement Elvis brought to the stage.  It is truly a family friendly show.

LeDoyt has performed successfully in more than 100 casinos including Harrah’s, Hard Rock, Cherokee, Isle Of Capri, Horseshoe, Caesars, Diamond Jacks, Diamond Jo’s and many others.  At Riverwind Casino in Norman, OK he has sold more than 1,000 seats annually eight years in a row.

Performing Arts Centers and Arts Councils have become big fans of LeDoyt’s show.  He has played more than 50 of them, selling out nearly every show and drawing new fans to those venues.

A big hit at fairs and festivals, LeDoyt has been the headliner for the Elvis Presley Festival in Tupelo; MS, Elvis Week in Memphis, TN; the Americana and Hemsby Festivals in England; the Iowa State Fair; as well as many fairs and festivals.  He has also headlined repeat shows at Hershey Park and Busch Gardens in Tampa.

Around the world, LeDoyt has entertained in England, Scotland, Luxembourg, Hong Kong, China, Canada and Argentina.  He is also a headline entertainer for Royal Caribbean Cruise Lines, having worked for them for the past 8 years doing 10-15 cruises per year in the Caribbean, Hawaii, Alaska, and all along the East coast.

In the corporate world, LeDoyt was the headline entertainment for the Fed Ex corporate party in Memphis, TN for two consecutive years.  He was also the headliner for the International Hot Rod Association’s (IHRA) convention in Louisville, KY for two years.  He has performed other numerous corporate events and private parties where his interaction with the audience members make him a tremendous hit.

As an opening act LeDoyt has been honored to open shows for Little Richard, Johnny Rivers, B. B. King, Chuck Berry, Jerry Lee Lewis, Bill Haley's Original Comets and others.

The biggest compliment LeDoyt has received came from D. J. Fontana who was Elvis Presley’s drummer in the 50s who said,  “This is as close as you’ll get to seeing a concert by Elvis Presley in the early years.”  Other accolades come from the New York Times who chose LeDoyt as the person who most looked like Elvis for a photo shoot and from entertainment reporter Ken Fuson of the Des Moines Register “I heard people all day talking about Travis LeDoyt so I went to see for myself.  I thought Elvis was dead but I tell you he’s alive – I just saw him perform.  He’s the surprise hit at the (Iowa State) fair.”  The accolades and fan responses continue on LeDoyt’s Facebook Page – see videos, photos and what people are saying at www.facebook.com/travisledoyt.